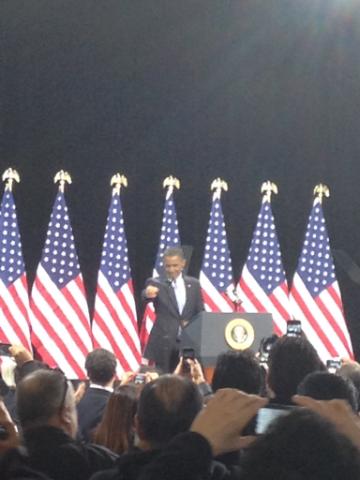 “Yes we can,” the crowd cheered in Spanish at President Obama’s opening statements today in Las Vegas.

At 11:41 a.m., the president took the stage to the sound of roaring cheers and to the sight of large smiles. This writer had the opportunity to attend Obama’s speech, and the packed Del Sol high school gymnasium was shaking with the festive excitement of over two-thousand people.  Everyone knew what they were about to hear.

“It’s exciting and nerve-wracking. He promised us immigration reform, so we hope to hear progress instead of just promises,” said Mina Huereca just minutes before Obama’s speech. She is a young DREAMer representing the Arizona Dream Act Coalition, ADAC. Many young members of several Arizona pro-immigrant organizations were in attendance. They made the trip to Las Vegas just to be able to hear the president’s words.

A Las Vegas DREAMer in attendance, Jose Espino, who was recently approved for Deferred Action, was more firm about what he wants Obama to do:

“I hope he makes this happen with a pathway for citizenship.”

Obama said this is the perfect time to do immigration reform to strengthen the U.S. economy. He added that the current immigration system is holding us back:

“We have to bring this shadow economy into the light so that everybody is held accountable, businesses for who they hire and immigrants for getting on the right side of the law. That’s common sense.”

He went on to describe the difficulties of brilliant students who sit in classrooms in top U.S. universities and are eventually forced to go back to their home countries.

A bipartisan group of Senators announced their proposal for immigration reform yesterday. Even though Obama announced and praised them, he said that it’s important to understand that the foundation for bipartisan action is already in place. He warned that if Congress doesn’t move forward in a timely fashion, he will send up a bill himself and insist on an immediate vote.