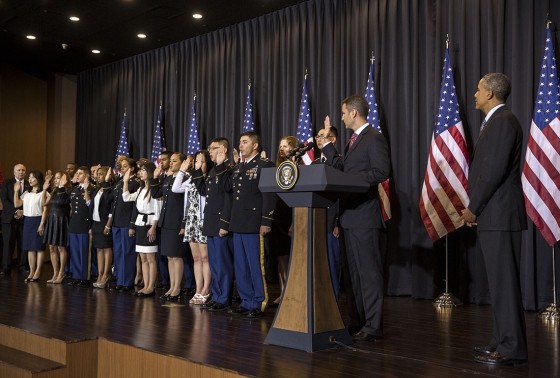 President Barak Obama performed the swearing-in at a naturalization ceremony for immigrants who are serving in the U.S. military in Seoul, South Korea. The ceremony, which came midway during his eight-day April tour of Asia, included the president’s calls for the reform of U.S. immigration laws.

In his remarks to 13 military members just before swearing them in as American citizens, the president said the immigrants’ service to the U.S. even before becoming citizens demonstrates immigration as one of the nation’s strengths.

“What makes us Americans is something more than just the circumstances of birth, what we look like, what God we worship, but rather it is a joyful spirit of citizenship,” the president said at the ceremony, held at the War Memorial of Korea. “Citizenship demands participation and responsibility, and service to our country and to one another. And few embody that more than our men and women in uniform.”

Immigrants who serve in the military don’t get U.S. citizenship automatically, but federal officials can expedite application and naturalization processes for veterans.

“If we want to keep attracting the best and the brightest, the smartest and the most selfless the world has to offer, then we have to keep this in mind: the value of our immigrants to our way of life. It is central who we are. It’s in our DNA,” the president continued. “And that means moving forward, we’ve got to fix our broken immigration system and pass common-sense immigration reform.”

Although the president’s words were delivered to a foreign audience on the other side of the world, the message on immigration was one clearly meant to be heard closer to home. Although the Senate has passed a comprehensive immigration reform bill, fits and half starts on the measure has kept reform stalled on the House side. Still, the White House repeatedly lists immigration reform as a top issue of the year.