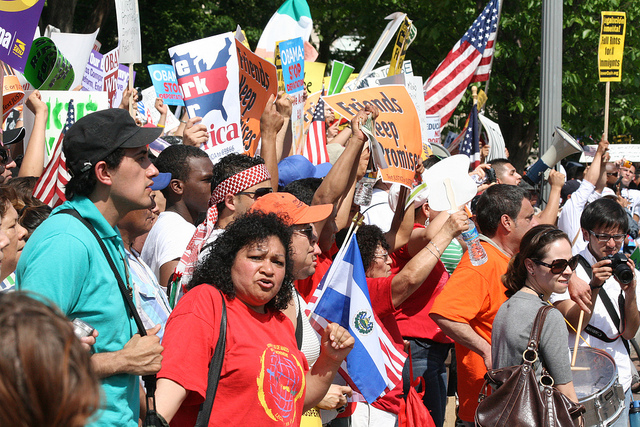 Some of the goodwill President Obama has built up with the immigrant advocacy community over the last year or so has eroded over the last several weeks as federal officials conducted holiday-season raids on Central American immigrants targeted for deportation. While the president issued executive orders that allow for a more lenient policy toward undocumented immigrants in November 2014, the White House is now attempting to send a message to natives of the region that they won’t be allowed to stay in the United States.

The president’s executive orders, which spared millions from the risk of deportation, expanded Deferred Action for Childhood Arrivals (DACA) and Deferred Action for Parents of Americans (DAPA.) The expansions of the programs were quickly challenged by a number of states. Currently, the issue is tied up in the courts.

Congressional Democrats say White House officials didn’t notify them of the deportation plans. Rep. Luis Gutierrez and other congressional lawmakers met with Domestic Policy Council Director Cecilia Munoz and other administration officials to express their outrage. According to a Yahoo News report, Gutierrez pointed to GOP candidate Donald Trump’s praise of the raids as evidence that the approach is misguided.

“Look, what I said to her is, I said, ‘Think about it a moment. Donald Trump is praising your public policy on immigration. You should need no further evidence of how wrong it is,'” Gutierrez said.

Still, advocates around tighter immigration controls are skeptical that the deportation will have the deterrent effect the White House is promoting. In targeting families for the raids, the more serious problem of terrorism is muffled in the chaos.

Roy Beck, president of NumbersUSA, a group lobbying for a curb on immigration, told the Wall Street Journal, “We would love to believe DHS is serious about sending a different message to the rest of the world that our borders are not open, but we won’t believe it until we see it” and calls the “far too little and too late.”

On the senate side, Minority Leader Harry Reid is reaching out to the Department of Homeland Security (DHS). According to Yahoo, Sen. Reid said he’s asking DHS to “back off till we can find out a better way to do this.”

A White House spokesman defended the administration’s actions, saying that the 121 people targeted for deportation were immigrants with final orders for removal as they have exhausted all legal claims and remedies.

Jeh Johnson, who heads up DHS, told reporters, “This should come as no surprise. I have said publicly for months that individuals who constitute enforcement priorities, including families and unaccompanied children, will be removed.”

Already, several immigrants who were targeted for deportation have gotten the removal process put on hold. While the raids affect a relatively few number of immigrants, House Minority Leader Nancy Pelosi argues more legal help is needed for the families slated for deportation.

“We need to obey our laws. But we also want to, in obeying our laws, make sure that the process is fair to people,” Pelosi said.