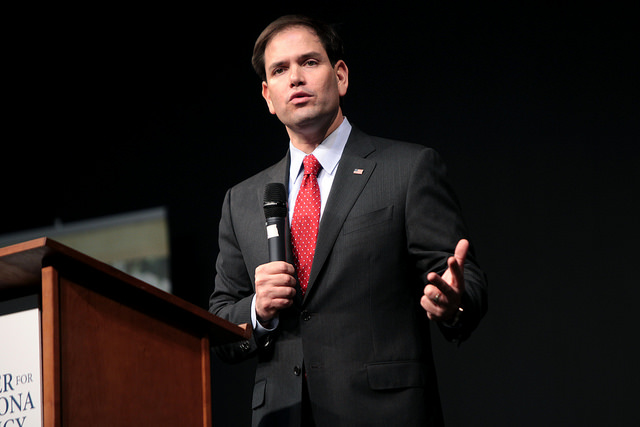 With a conservative stance on immigration as a driving theme in the Republican Party presidential race, Sen. Marco Rubio is casting a bid toward social liberals in the party by adopting a stance that allows undocumented immigrants to stay in the United States. The move, announced on the NBC Sunday political news show “Meet the Press,” contrasts with GOP front-runner Donald Trump’s crackdown proposals.

“If you’re a criminal alien, no, you can’t stay. If you’re someone that hasn’t been here for a very long time, you can’t stay,” Rubio said on the program. “I don’t think you’re gonna round up and deport 12 million people.”

Prior to the news show broadcast, Rubio focused his immigration platform on border security.

Politico describes Rubio’s immigration position as a lawmaker “somewhat fluid” as the Trump phenomenon casts a long shadow on government policy issues. Rubio was part of the so-called Gang of Eight in which Capitol Hill representatives developed an immigration reform bill.

Haunting Rubio at this point is the failed bill’s proposed path to citizenship. This aspect is particularly troublesome for conservatives who see the policy as an incentive and reward for illegal behavior.

In the “Meet the Press” interview, Rubio didn’t disclose if the policy implemented during his presidency would include the path to citizenship element that was part of the Gang of Eight bill.

While his Republican counterparts might say Rubio’s newly-announced position is evidence of a flip-flop, Rubio contends his approach is based on the reality of today’s world, which includes the lack of a high-functioning Congress capable of developing workable laws and policies.

“If circumstances change or you learn something along the way, it’s reasonable to say, ‘Maybe a different approach will work better,’” Rubio said. “So, for example, on immigration it is clear no comprehensive solution to immigration is going to pass.”