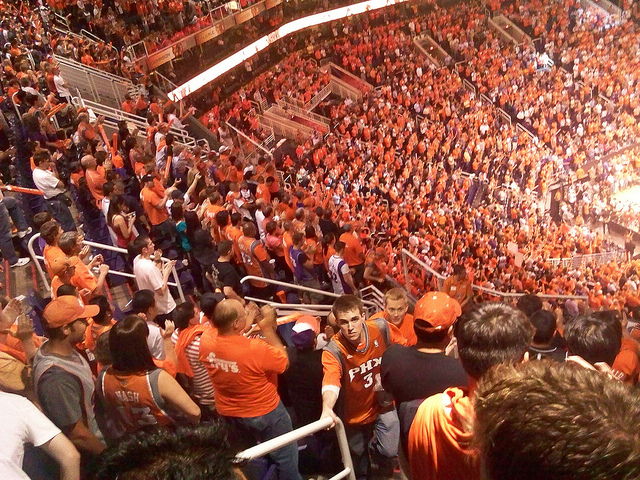 Basketball fans attending a recent Phoenix Suns vs. Houston Rockets game were treated to more patriotism than the standard Star Spangled Banner played before the tip off of the NBA game. At halftime, 50 immigrants with nationalities from 16 countries around the world took the Oath of Allegiance in a naturalization ceremony at Talking Stick Resort Arena.

The venue of the ceremony was a first. U.S. Immigration and Citizenship Services (USCIS) worked with the Phoenix Suns through an effort from Citizenship Counts. The non-profit organization, which holds strong ties to the Arizona city, is focused on pride and inspiration around America.

Citizenship Counts, co-founded by a Holocaust survivor and her granddaughter, works with middle and high school students by delivering curriculum to public, private and charter schools in 36 states. In particular, lessons focus on the rights and responsibilities of citizenship.

Alysa Cooper, the granddaughter co-founder of Citizenship Counts, told jewishaz.com the curriculum centers on the privilege afforded to U.S. citizens.

“The main bread and butter of the organization is educating the students on the naturalization process, to help them understand what people from other countries go through in order to have so many of the freedoms that many of us who were fortunate enough to be born here take for granted sometimes,” she said. The students learn about the process and related issues and take the naturalization exam, as well.

Cooper’s outreach to the NBA team stems from her desires to connect patriotism felt by natural born and immigrant-born citizens on a grand stage.

“For a while, I have wanted to marry that community outreach component with something on a large scale, such as a sporting event,” Cooper said.

At the February 19 ceremony, the foreign-born group pledged the Oath of Allegiance as the new citizens were honored and welcomed by players, coaches, referees and thousands of cheering fans.

The Suns organization donated a block of tickets and Phoenix Light Rail passes to students from Phoenix Union High School District who have completed the Citizenship Counts program.