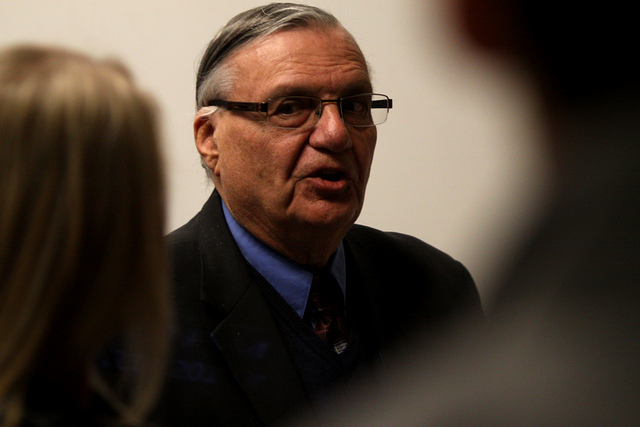 Maricopa County, Arizona Sheriff Joe Arpaio, a law enforcement official whose famous for his hardline stance against undocumented immigration, has been found in civil contempt of court for his failure to cease racial profiling as he and his deputies patrol the jurisdiction. The ruling, which was issued in late May, could lead to a possible criminal contempt of court proceeding against the Maricopa County Sheriff’s Office.

The contempt finding stems from a court order issued by U.S. District Judge Murray Snow. In 2011, Snow issued an injunction prohibiting sheriff’s officials from targeting Latinos during traffic stops, according to The Atlantic. In the case, Snow ruled sheriff’s officers subjected Latino drivers to a higher degree of scrutiny than non-Latino drivers.

Pointing to Sheriff Arpaio’s resistance to following the order, the judge followed up in 2013 by appointing a court monitor to gauge compliance with the order to stop racial profiling.

Allegations in the contempt trial include:

“The Court finds that the Defendants have engaged in  multiple acts of misconduct, dishonesty, and bad faith,” Snow wrote in his ruling.

According to the published report, sheriff’s traffic patrols occurred “mainly while conducting immigration seeps aimed at Latino neighborhoods.” The patrols took on legal issues after Arpaio’s deputies pulled over Jesus Ortega Melendres, a Mexican tourist who was in the country legally, while he was a passenger with a white driver and then detained for nine hours. Along with the American Civil Liberties Union, Melendres filed a complaint against the sheriff’s office in the U.S. District Court District of Arizona.