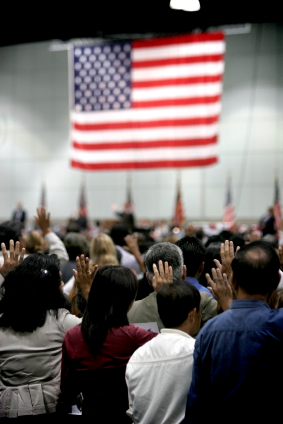 With the nation’s celebration of its 240th year of independence, more than 7,000 new Americans joined the ranks of the country’s citizenry through nearly 100 naturalization ceremonies that took place from June 30 through July 4. At venues all around the country, the holiday weekend saw new citizens underscore their celebration of the Declaration of Independence by simultaneously taking the Oath of Allegiance to the United States.

Ceremony venues where citizenship candidates took the Oath of Allegiance include public parks and historic landmarks nationwide. Among these is the William Paca House and Garden in Annapolis, Maryland. During this ceremony, U.S. Citizenship and Immigration Services (USCIS) Director León Rodríguez administered the Oath of Allegiance and delivered congratulatory remarks to 24 new Americans.

“These new Americans will strengthen the fabric of our nation with their contributions to American society and prosperity, and be able to enjoy all the rights, privileges and responsibilities of U.S. citizenship,” Rodríguez said in a USCIS press release.

Of the lawful permanent residents who crossed the threshold into naturalized citizenship over the Independence Day weekend, venues included:

A full list of the Independence Day naturalization venues is available on the USCIS site.