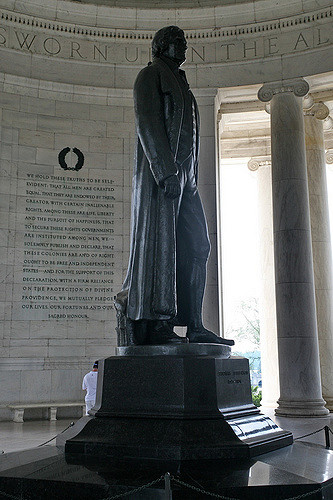 More than 38,000 immigrants are slated to become some of America’s newest citizens through 240 naturalization ceremonies across the country that correspond with Constitution Week and Citizenship Day from September 26-23. Celebrating 239 years since the signing of the Constitution on Sept. 17, 1787 and “I Am an American Day,” a commemoration that began in 1940, the ceremonies underscore the meaning of U.S. citizenship with reflection on the connection between the Constitution and citizenship.

According to a U.S. Citizenship and Immigration Services (USCIS) press release on the celebrations taking place during the week, “The Constitution plays a meaningful role in the lives of new Americans. It not only establishes the rule of law, but also creates the framework for an immigration system that enables immigrants to become full citizens with the same rights, privileges and responsibilities as any other.”

The Thomas Jefferson Memorial in Washington, D.C. and Ellis Island in New York City are among the most famous sites where the naturalization ceremonies will be held. These venues reflect the USCIS partnership with the National Park Service (NPS), which began in 2006.  Other iconic landmarks where ceremonies will take place are the Lincoln Memorial and Yosemite National Park.

Earlier this year, USCIS committed to performing 100 naturalization ceremonies on NPS sites in recognition of the NPS 100-year anniversary. “These picturesque and quintessentially American places inspire new citizens and those who witness naturalization ceremonies to celebrate and experience our country’s history and natural beauty, and to protect it for future generations,” reads the Constitution Week release from USCIS.

Naturalization ceremonies are also scheduled to be held at U.S. courts where federal judges will preside over the event and administer the Oath of Allegiance.

Guest speakers at other naturalization ceremonies around the country include NASA Administrator Charles Bolden and Mary Giovagnoli, deputy assistant secretary for immigration policy at the Department of Homeland Security.