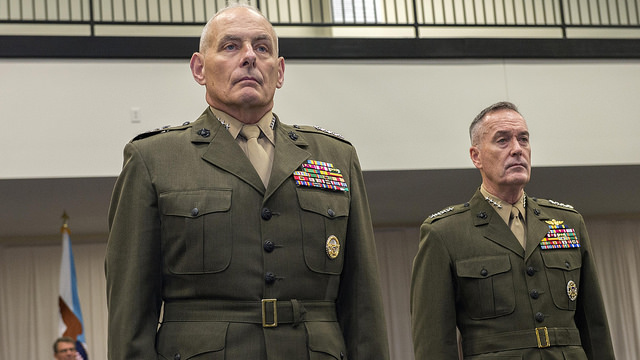 Although he has yet to take the Oath of Office as the 45th president of the United States, Donald Trump’s cabinet nominees are already undergoing confirmation hearings. Tapped for the Department of Homeland Security (DHS) is John Kelly, a retired U.S. Marine Corps general with expertise in the combatting of human trafficking and drug smuggling.

As DHS secretary, Kelly’s charge will  include a range of responsibilities administered through sub agencies, including those centered on immigration and border security. Among these are U.S. Citizenship and Immigration Services (USCIS) and Immigration and Customs Enforcement (ICE.) The largest agency operated under DHS’s U.S. Customs and Border Protection (CBP.)

During his tenure in the Marine Corps, Kelly headed the military’s Southern Command. The post, based in South Florida, routinely works alongside DHS in fighting human slavery and illicit drug smuggling.

Particularly interesting is that the Southern Command has also partnered with ICE in efforts to help rescue unaccompanied child immigrants making their way from Central America to the United States alone. Kelly’s past statements, according to NPR.org, includes statements in support of economic aid and educational efforts as necessary components in stemming the flow of undocumented migrants from Central America into the United States.

Kelly’s confirmation as DHS secretary is highly likely, according to a news report from The Washington Times. The retired general’s confirmation hearing will go through the Senate Homeland Security and Governmental Affairs Committee. Tom Carper of Delaware, the former ranking Democrat on the confirmation committee, describes Kelly as a friend. Republican committee chairman Ron Johnson of Wisconsin  praised Kelly as having a “deep knowledge and understanding of the grave security threats facing our nation and the sacrifices that are required to keep us safe.”

DHS, which is endowed with a $40 billion budget and 250,000 employees, is a touchstone as the department and Kelly will steward the implementation of Trump’s immigration policies. During his campaign, President-Elect Trump vowed to deport millions of undocumented immigrants living in the United States. Hearings for Kelly are expected to center on his approach to accomplishing those policies.

In a statement issued to members of the Senate committee, Kelly told senators he has “profound respect for the rule of law” and as secretary “will always strive to uphold it.”