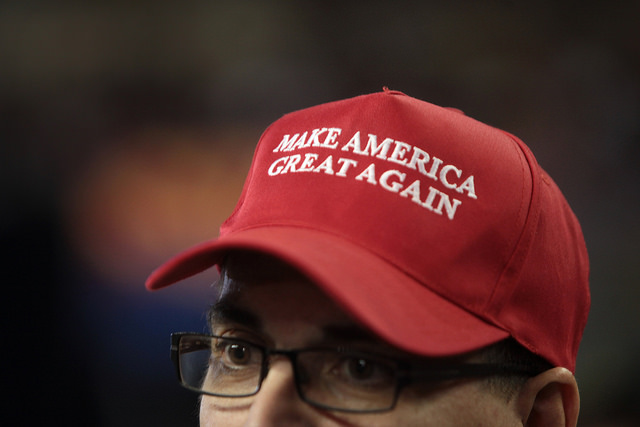 A strong political statement at this year’s Grammy Awards came from a Filipino immigrant and naturalized citizen who designed a “Make America Great Again” pro-Trump gown worn by musician Joy Villa. The design is in direct response– and in direct contrast to– other high-profile celebrity statements opposed to President Trump.

As political statements from entertainers seems a contemporary norm, music fans who tuned into the awards show were expecting to see artists creatively exercising First Amendment rights. That one of the most attention-grabbing statements came in the form of a pro-Trump dress is the more surprising part of the equation.

The red, white and blue gown with the Trump “Make America Great Again” slogan emblazoned vertically down the front and “TRUMP” on the train.

“The controversial dress was a rare sight at the awards show otherwise marked by several anti-Trump messages and advocacy for liberal causes,” according to a Washington Times report.

The designer of the gown, Andre Soriano, describes himself as a proud American who exhibits the American dream.

“There are a lot of people that are in power that really misconstrued what this country stands for,” Soriano told The Hollywood Reporter about his political perspective on the presidential election.

Many celebrity entertainers are known for their backing of Democratic candidates. Some, like renowned actress Meryl Streep and pop icon Madonna and others, have each made well-publicized anti-Trump statements.

In January, at the motion picture industry’s Golden Globes Awards, Streep criticized the president’s immigration policies. More recently, Streep has contended “armies of brownshirts” have attacked her for her positions. Though these attacks are “terrifying,” Streep vows vigilance in her pursuit of social justice causes.

At the Women’s March, which occurred the day after President Trump’s inauguration in cities across the country, Madonna told a New York crowd that she fantasizes about blowing up the White House. It was a statement that fueled Soriano’s creativity.

“I heard that somebody wanted to bomb the White House,,” Soriano said. The statement served as inspiration with his decision to “make a statement on what is right for our country, of what we believe in, for the Constitution.”