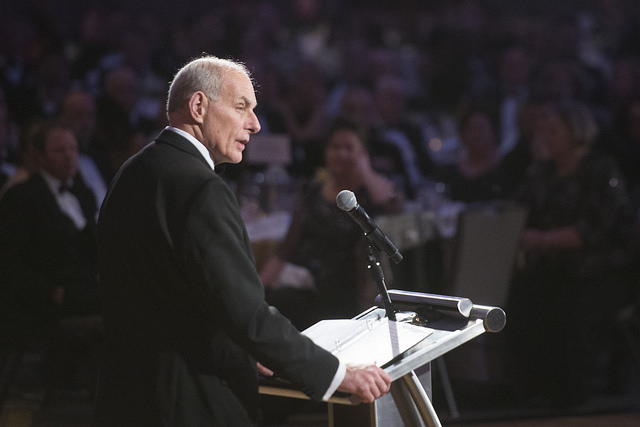 Department of Homeland Security (DHS) Secretary John Kelly meets with members of Congress to discuss immigration laws and enforcement issues as well as President Trump’s proposed border wall. His statements were intended to give the elected officials an overview of agency policies and practices within a President Trump administration.

Senators on the Democratic side of the aisle sought reassurances, according to Politico, “that there would be boundaries” around immigration enforcement practices.

To this, Kelly offered compassionate responses in terms of promising agents won’t separate mothers and children at the border. The exception to this, he said would be in cases where mothers are sick or injured.

Kelly also pledged those enrolled in the Deferred Action for Childhood Arrivals (DACA) Program– an executive order under President Obama that gives deportation relief to young undocumented immigrants– won’t find themselves as targets in any enforcement program.

“Privately, Kelly sought to mollify senators who have for weeks been outraged by the Trump administration’s hard-edged immigration policies,” Politico reports. During the meeting, Kelly told Senators “the administration was still mainly targeting for deportation those who had committed crimes, and that they didn’t even have the manpower to deport all undocumented immigrants in the country.”

In other comments to Senators, according to a CBS report, President Trump’s proposed wall along the U.S. / Mexico border will most likely not stretch “from sea to shining sea.”

“We’re not going to build a wall where it doesn’t make sense,” the secretary said, presumably alluding to natural barriers between the two countries. “But we’ll do something across the southwest border,” he said.

Sen. Claire McCaskill, a Missouri Democrat, derided the idea of a border wall. “It’s embarrassing,” McCaskill said, alluding to a range of challenges associated with the proposed barrier. “It’s not going to happen,” she said. “Everybody in Congress knows it’s not going to happen…. It appears the only person who won’t say it out loud is the president.”