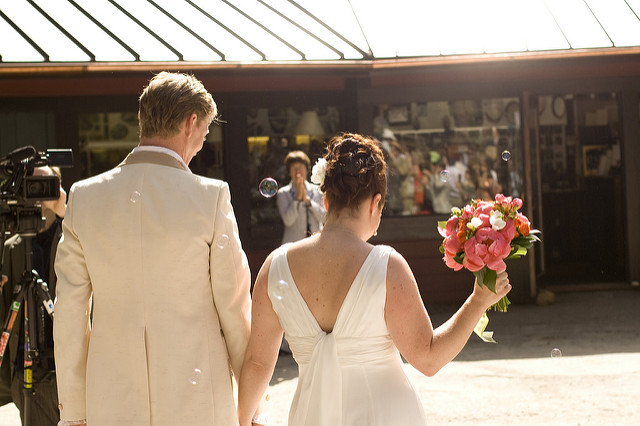 As immigration policy under President Trump evolves, some of those most directly affected by the issue are bypassing potential obstacles by accelerating wedding plans. By tying the knot sooner rather than later, mixed citizenship couples seek to take advantage of an accelerated path in establishing permanent residency status for the foreign-born side of the match.

The most recent statistics from the Department of Homeland Security (DHS)— from 2013 to 2015– shows a 7 percent increase in the number of foreign-born nationals obtaining green cards through marriage. Although more current evidence is largely anecdotal, The Boston Globe reports city clerks around the country say a spike in marriage certificate applications occurred after President Trump’s election win in November. What’s more, “observers note that the number of weddings at City Hall involving immigrants has increased since Trump was elected, with a marked increase after he took office.”

A foreign national is automatically bestowed with permanent residency through marriage to a U.S. citizen– as long as the union is deemed legitimate. Complicating the matter is that much of the demographic affected– millennials– are more likely to seek a prenuptial agreement. As clients accelerate wedding dates and request revised prenuptial agreements to accommodate the change, one attorney refers to the phenomenon as “Trump-up prenups.”

In addition, federal law requires Americans who marry foreign nationals to sign a spousal financial support affidavit should this support become necessary. The financial commitment extends until the spouse becomes a U.S. citizen or the spouse has worked for the equivalent of 10 years, even in cases where the couple divorces in the meantime.

“The intent is to keep people off public assistance,” according to the Boston Globe, “but it could interfere with alimony agreements.”