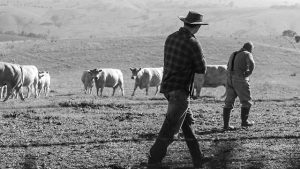 U.S. farmers located in the Midwest, a group typically disposed toward conservative politics, are pushing for an agricultural-friendly policy for crucial immigrant labor. Because of their pressing need for able-bodied immigrants, farmers remind lawmakers of the impact of immigration policy on the agricultural industry.

According to the reported Department of Agriculture number on crop labor, only 22 percent of workers in the category during 2013 and 2014 were born in the U.S., a clear data point underscoring the importance of immigration to the industry.

Drilling down further, Business Insider reports on a 2015 National Milk Producers Federation (NMPF) survey of 1,000 dairy farms across the country. Findings include a dairy labor force accounting for 51 percent of workers in the United States. The dairies employing immigrants account for 79 percent of the country’s milk supply.

Farmers make up only 2 percent of the U.S. population, but feeding the nation means the agricultural industry “has a dramatically disproportionate effect on the country’s economy,” according to Business Insider. This means the traditionally tough immigration stance held by Republican leadership has “created a political rift between some farmers and their representatives.”

Within this paradigm, populist anti-globalist sentiments have put farmers somewhat at odds with political leadership. For example, free trade policies under previous administration have yielded bottom-line results for farmers. In addition, “farmers were left in a lurch after both Democrats and Republicans came out against the Trans Pacific Partnership in the 2016 election.”

The economic fallout of losing immigrant workers in the dairy industry, according to the survey from industry association NMPF, amounts to the loss of more than 7,000 U.S. dairy farms and a spike in retail milk prices of 90 percent.

From a high level, farmers have gotten their point across to policy makers. President Trump, for instance, promised farmers at a roundtable in May that the agriculture industry wouldn’t endure harm with tough immigration-enforcement policies.

Farmer Lee Maassen, an owner in a 100-year-old family dairy farm, currently employs 16 immigrants out of a total of 26 employees for the 24×7 work at Maassen Dairy. The family, which has sponsored some workers in their citizenship applications.

“All of our workers, they’ve paid their full amount of federal income tax, full amount of state tax,” the self-described conservative farmer says. “They’ve done everything as a citizen should.”