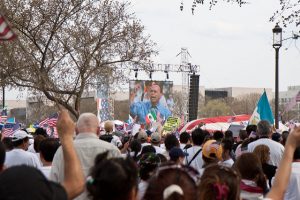 As President Trump continues moving forward in amending U.S. immigration policies, supporters of the Deferred Action for Childhood Arrivals (DACA) Program working to keep the program in place face charges after arrest in a sit-in protest on the sidewalk outside the White House. Among those arrested is Rep. Luis Gutierrez, an Illinois Democrat with a long history of fighting for immigrant rights.

The demonstration, organized to coincide with DACA’s introduction five years ago, was intended to highlight the importance of the program and to urge President Trump to continue its existence, according to The Washington Post. As the GOP nominee, the president campaigned vigorously on the implementation of tighter immigration policies and promising to rescind President Obama’s “two illegal executive amnesties.” Since his election, however, President Trump has referred to Dreamers– DACA beneficiaries– as “incredible kids” who “shouldn’t be worried.”

At the same time, Gutierrez and the other 25 or so demonstrators arrested at the sit in– including Maryland gubernatorial candidate and former NAACP President Ben Jealous– have good cause to avoid sitting idly by with the comforting words. As previously reported, Texas and nine other states around the country have threatened to sue the Trump Administration, claiming DACA is an illegal program.

“If, by September 5, 2017, the executive branch agrees to rescind the June 15, 2012 DACA memorandum and not to renew or issue any new DACA or Expanded DACA permits in the future, then the plaintiffs…will voluntarily dismiss their lawsuit,” reads a memo sent to the president by state attorneys general. If the president continues the program, the state lawyers plan to continue moving forward in the courts to gain a ruling against DACA.

If the president doesn’t actively rescind DACA and the states move forward with the suit, administration officials could simply decline to defend the suit. This is a real possibility considering Jeff Session, U.S. Attorney General and head of the Department of Justice, adamantly opposes the program. Nonetheless, President Trump says the decision on whether to defend DACA in the courtroom or to let it wither on the vine is up to him, not Attorney General Sessions.

In the meantime, Rep. Gutierrez likely won’t allow himself to be relegated to the sidelines. Besides his arrest in Washington D.C., the congressman was also arrested in March this year for protesting the president’s immigration policies during a Chicago demonstration at Immigration and Customs Enforcement (ICE) offices.