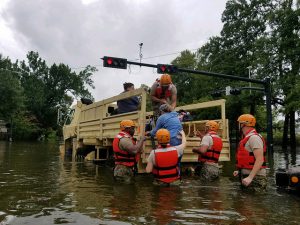 As dangerously high winds and rain accompany Hurricane Harvey in southern Texas, evacuations to emergency shelters come with officials stressing a de-emphasis on immigration status. Expecting an onslaught of destruction from the Category 4 event, federal, state and local officials all underscore their objectives to “promote life-saving and life-sustaining activities, the safe evacuation of people who are leaving the impacted area, the maintenance of public order, the prevention of the loss of property to the extent possible, and the speedy recovery of the region,” according to a U.S. Immigration and Customs Enforcement (ICE) release.

Presumably, ICE disseminated the statement to ease the minds of the many undocumented immigrants “who have very good reasons not to trust the government in general,” according to one online outlet. And because the elevated distrust under a Donald Trump presidency and a state governorship under Greg Abbott in particular, the article continues, “the government is sending mixed messages about whether it wants to save immigrants or deport them.”

At the same time, Texas officials put out the word that law enforcement won’t check the legal status of those in the state who check into emergency shelters. Because of harsher perceptions around border and immigration enforcement, executing on public safety comes at a time “when the government suddenly needs unauthorized immigrants to trust it, after giving them every reason in the world not to.”

On a ground level, Customs and Border Protection (CBP) maintains roadside checkpoint operations within 100 miles of the US-Mexico border during the evacuation. The checkpoints close if the highway closes due to the hurricane’s path.

Trump Administration officials noted CBP as an enforcement agency “and we will not abandon our law enforcement duties.” A spokesperson in the CBP’s Rio Grande Valley Sector added: “we’re not going to impede anybody getting out of here.”

While undocumented immigrants weigh the pros and cons of passing through checkpoints to escape the hurricane onslaught, detainees at Port Isabel Detention Center are transferring into facilities further outside the storm’s impact area under the custody of ICE officers. Port Isabel, located 30 miles east of the storm’s Brownsville target, in Los Fresnos.