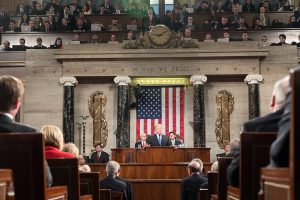 In his first State of the Union (SOTU) speech, President Donald Trump devoted substantial time to discussing the Deferred Action for Childhood Arrivals (DACA) program and other immigration issues in the annual address to both houses of Congress. The speech, recorded as the third longest SOTU address in the nation’s history, included 20 minutes on the topics of DACA, immigration and border security.

Immigration as a top-priority issue runs the duration not only of President Trump’s short political career but also in a much more expansive sense as much-need updated federal legislation around the topic continually eludes representative lawmakers. President Barack Obama introduced DACA through an executive order in late 2012, the program which has since maintained prominence as the most proactive component of leadership around immigration.

In September, President Trump pushed the envelope in terms of demanding national leadership accountability. At the time, he signed an executive order to end the DACA program with a 6-month window for Congress to adopt a permanent legislative solution. While DACA bestows temporary legal status and employment authorization in 2-year increments, the president’s decision to toss the immigration football back to Congress was intended to spur a permanent legal solution for the hundreds of thousands of young people protected by the program.

Since then, ongoing reports about discussions between and among legislative leadership and the president yield little in the way of solutions or direction for those facing massive societal limitations due to a lack of legal status.

President Trump effectively took the DACA program out of the picture as a potential negotiation stumbling block with Democrats with the proposal to extend DACA to more than twice the number of undocumented immigrants currently qualified under the program. He also wants the program to work as a first step in a path toward full U.S. citizenship.

While President Trump’s full embrace of DACA riles the most conservative factions of the Republican Party, Democratic leadership takes issue with the administration’s enforcement and security stance. The president’s continued advocacy for a southern border wall and his administration’s increasing crackdowns on sanctuary cities act as among the most divisive topics for the most liberal portions of the Democratic Party.

In a metaphorical sense, the unhappy elements among immigration activists on all sides of the issue could indicate President Trump has hit many of the right notes in finding a practical and compassionate solution to an ongoing national issue. Whether political leadership seizes the opportunity to forge ahead with a new immigration paradigm or to dig in and fight for ideological rigidity remains to be seen over the coming weeks and days.