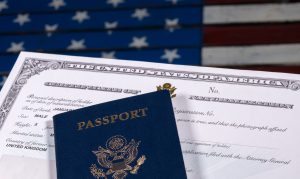 Stating an intention to prosecute some 1,600 cases, U.S. Citizenship and Immigration Services (USCIS) cracks down on fraud with the pursuit of denaturalization proceedings. With the prosecutions, federal officials seek to root out those individuals who unlawfully obtained citizenship.

USCIS, an agency that operates under the Department of Homeland Security (DHS,) referred the cases to the Department of Justice (DOJ) as a part of Operation Janus. Through the DHS initiative, Operation Janus “identified about 315,000 cases where some fingerprint data was missing from the centralized digital fingerprint repository,” according to a USCIS release. “Among those cases, some may have sought to circumvent criminal record and other background checks in the naturalization process.”

In January, U.S. District Court Judge for the District of New Jersey, Judge Stanley Chesler, handed down the first of the revocation of naturalization orders. The revocation of the naturalization order reverts the defendant in the case back to lawful permanent resident (LPR) status. LPR renders the defendant “potentially subject to removal proceedings” at the discretion of DHS.

India native Baljinder Singh aka Davinder Singh, the first of the defendants in the Operation Janus cases, arrived in the United States in 1991 at the San Francisco International Airport without travel documents or proof of identity, according to a DOJ release. With the case moved to exclusion proceedings, the defendant failed to appear for the immigration court hearing. In 1992, he was ordered excluded and deported. Just a month later, “he filed an asylum application under the name Baljinder Singh. He claimed to be an Indian who entered the United States without inspection. Singh abandoned that application after he married a U.S. citizen, who filed a visa petition on his behalf. Singh naturalized under the name Baljinder Singh on July 28, 2006.”

“I hope this case, and those to follow, send a loud message that attempting to fraudulently obtain U.S. citizenship will not be tolerated,” USCIS Director Francis Cissna said. “Our nation’s citizens deserve nothing less.”