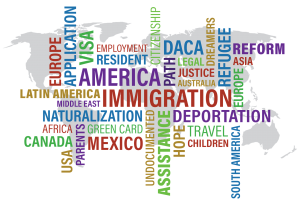 As the latest stop-gap measure designed to maintain federal government spending needs ends in early February, bipartisan lawmakers propose immigration bills as a means to avoid a budget impasse. By addressing immigration– specifically, as it relates to those young, undocumented immigrants generally classified as Dreamers– lawmakers hope to establish the kind of common ground required in adopting a two-year budget.

House and Senate proposals provide legal status and a path to citizenship for young, undocumented immigrants who entered the United States as children. In the Senate, Arizona Republican and Armed Services Committee Chairman John McCain and Delaware Democrat Chris Coons propose a measure giving a path to citizenship to Dreamers who’ve lived in the country since Dec. 31, 2013. The Senate bill also orders a “comprehensive study” around border security needs, according to The Wall Street Journal, but “stops well short of almost all of the president’s demand,” which includes a call for immediate funding of a southern border wall.

The Senate bill lays out near identical parameters to a bill introduced in the House of Representatives. In the House, Texas Republican Will Hurd and California Democrat Pete Aguilar back their version of the bill with the support of 27 House colleagues.

Additionally, the legislation calls for the hire of new immigration judges and staff attorneys over the next 3 years as well as funding for a State Department study around causes of immigration from Central America into the United States.

A historically divisive political issue, the issue of immigration law only gained in importance when President Trump ended the Obama era Deferred Action for Childhood Arrivals (DACA) program. With the official end to DACA currently slated for March, lawmakers’ feet are moving closer and closer to the fire with mounting pressure to work out a deal for the group.

For his part, President Trump is asking Congress to allocate $25 billion for wall funding and other border security measures. The president also aims to reduce family-based immigration– known as chain migration– and to increase numbers around highly-skilled immigrants.

Reportedly, the president told GOP lawmakers that he’s prepared to walk away from any deal that doesn’t include his demands.