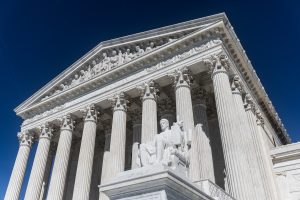 The Supreme Court rejects the Trump Administration’s efforts to bypass lower courts in the president’s appeal of a federal judge’s decision that states the Deferred Action for Childhood Arrivals (DACA) program must continue. The High Court’s decision means challenges to President Trump’s decision to end DACA continue through normal channels, without leapfrogging the appropriate appellate court.

For DACA beneficiaries, the decision by the Supreme Court justices means U.S. Citizenship and Immigration Services (USCIS) will continue to process program renewal requests even after the president’s March 5 date as the end of the program passes. Federal court orders issued in the first two months of this year means the “DACA policy will be operated on the terms in place before it was rescinded on Sept. 5, 2017, until further notice,” according to an agency release.

The Supreme Court’s decision to force lower court hearings “leaves the DACA challenge pending before the California appeals court, where it is in the very early stages,” according to an NBC News report. “The Justice Department has said it would take at least another year to get back to the Supreme Court for a decision on DACA’s future.”

The decision means current DACA beneficiaries with expiring status can apply to USCIS to renew previously-granted requests for deferred action and employment authorization.

DACA recipients whose status expired before Sept. 5, 2016, or whose most recent grant was previously terminated, USCIS requires applicants to file a new initial DACA request. USCIS requests these applications include the date of the prior DACA expiration or termination.

In asking the High Court to allow a bypass of the lower courts, the solicitor general argued: “The district court has entered an unprecedented nationwide injunction requiring the government not simply to tolerate, but to affirmatively sanction, a continuing violation of federal law by nearly 700,000 aliens.”

While Trump Administration attorneys aimed for an expedited process around the legalities of ending DACA, officials “took the further unusual step of declining to ask the justices to block the lower court order in the meantime, which would have allowed the government to shut DACA down as planned,” NBC News reports. “Such a start-and-stop approach, the government said, would frustrate the goal of winding the program down in an orderly way.”

Of course, the courts will dismiss these DACA cases altogether if Congress passes a fix for Dreamers. The historical stalemate around immigration-related issues, however, means judges, not lawmakers, could ultimately decide immigration questions.