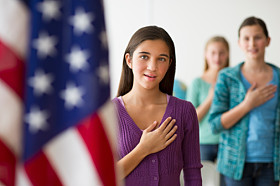 IN THIS ISSUE:
Will the USCIS Raise Filing Fees Again?
Delay in the Processing of Immediate Relative Petitions, Form I-130, at Texas Service Center
States are Lining Up to Enact Arizona-Style Immigration Laws
The Faces of US Immigrants: Cristeta Comerford
Recipes from the Melting Pot: Arroz Caldo, A Filipino Dish ala Cristeta Comerford
Failure to Pass the DREAM Act Resulting in a Nightmare for Many

With the failure of the U.S. Senate to enact the DREAM Act during the lame duck session in December 2010, the lives of many undocumented youths have been turned upside down. Data from the National Immigration Law Center state that approximately 65,000 undocumented students graduate from U.S. high schools every year. These are young men and women who came to the United States at a very young age, at no choice of their own, have grown up in the United States and do not find out that they are here illegally until some event occurs that results in their parents telling them. The idea behind the Development, Relief and Education of Alien Minors Act, also known as the DREAM Act, is to provide these young men and women an opportunity to obtain conditional permanent residency and eventually a road to U.S. Citizenship. If this law were to be enacted, these individuals would have to attend college or enlist in the military, and by fulfilling either of these requirements, the path to U.S. Citizenship would be clear to them.

We hear so many stories of many young men and women, especially those wishing to attend or are attending college, who find out that they are here illegally and are facing deportation to a country that they don’t know. Their American Dream has become a living nightmare. We have to ask ourselves, is this the American way? Where is our moral compass? It is at this moment that our legislators should take the words of President Lincoln to heart, that they be “touched, as surely they will be, by the better angels of our nature.”

Please contact your legislators and tell them to revisit the DREAM Act and begin to truly address immigration reform that will provide decent, law-abiding people a chance to become U.S. citizens and have a chance at the American Dream.