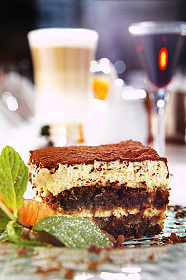 IN THIS ISSUE:
As The Sun Rises Over Tucson
Will The Green Card Lottery Go Away?
Surge Of Cubans Wanting To Reunite With Family In The United States
The USCIS Announces New Countries Eligible In The H-2A And H-2B Programs
The Faces Of U.S. Immigrants -Cary Grant

A Collection of Recipes from the Melting Pot

Prepare espresso and cool to room temperature. Separate egg yolks from whites; reserve whites. Whisk egg yolks and ¾ cup sugar until creamy. Whisk in mascarpone, half of the container at a time until light and creamy. Set aside.

Pour cooled espresso into flat plate (important to use flat plate). Quickly roll each ladyfinger so they are lightly wet (i.e., not thoroughly soaked). Put first layer into pan. Layer mascarpone onto ladyfingers. Layer with ladyfingers and then end with marscapone on top (you can have as many layers as needed as long as you end with mascarpone on top). When done, dust top with cocoa powder and refrigerate for at least 6 hours.

As people immigrate to the United States, they bring their culture with them and integrate it in wonderful ways within the Melting Pot that is the United States. This includes music and food. If you have any recipes that you would like to share with our readers, please send them to recipes@immgrationdirect.com and Thank You!